How does a "Light-Emitting Diode" or (LED) work?

A light-emitting diode (LED) is based on the semiconductor diode. When the polarization of input power is correct and the diode is switched on, current flows from the anode (positive) to the cathode (negative). The electrons are able to recombine with holes within the device, releasing energy in the form of photons. This effect is called electroluminescence and the color of the light is determined by the energy gap of the semiconductor and materials used in its construction. LED's can come in various colors which are created by the materials used to manufacture them. For example, a white light can be created by using a blue LED and coating it with yellow phosphor or with a combination of RGB light (red, green and blue).  An LED is usually small in area and it uses integrated optical reflectors and a lens to shape its radiated light pattern.

LEDs are more energy efficient than normal halogen bulbs (around 90% less) and can cut the costs of rising electric bills for the average household. They also cut the usage demands on an RV, boat or off grid housing battery bank.  On average, around 90% of the electricity consumed by an LED is converted into light, whereas a standard bulb only converts around 15%. Although the initial cost is higher, the savings in battery power and long service lifetimes, typically 25,000 to 100,000 hours will more than recapture the cost outlay and even create savings in the long run. Good LED bulbs last about 60,000 hours, compared to a 1003 incandescent bulb which is rated to last 200 hours.

Why do LEDs use such little power?

The Filament based "LIGHT BULB" consumes more power than the light produced because large amounts of energy consumed by these bulbs go to the production of "HEAT". LEDs produce very little “HEAT", and do not use filaments. Thus, LEDs are much more efficient in consumption and output.

Are LED's good for the environment?

LED's are very energy efficient and reduce carbon emissions. In fact, you may never need to buy a replacement bulb again, so no more throwing burnt out bulbs in the trash. They are also ROHS compliant and mercury free, unlike florescent bulbs which contain a high amount of mercury and phosphor. This can create a health hazard if broken inside a living area or if disposed of incorrectly.

Can LED lamps be used in existing light fittings?

The DELux LED bulbs work in standard light sockets, but since they are powerful directional light bulbs, it is up to the customer to determine if the intended end use is appropriate for their individual needs.

How to determine the lifetime of an LED?

Do LED Bulbs give off any heat?

LED bulbs by design use heatsinks, which absorb the heat and move it away from the LED and allow the LED to operate at its optimum temperature. So "YES", LED bulbs can get hot but nowhere near as hot as incandescent or halogen filament type bulbs.

What lighting quality can be expected from an LED bulb?

Their color and brightness are determined by degrees Kelvin, refer to chart below;

The higher the color temperature, the whiter the light is. A lower color temperature is more on the yellow side of white. This is important to you because you have to look at how light interaction will either compliment your interior, or might clash with it. The light can change even the color of what your interior looks like. Sometimes paint on a wall will look much different under one color temperature verses another. It should be noted that the lower color temperatures like 2700K, works well on objects that have earth tones, such as wood, leather or darker colors. The warmer colors "slightly yellow", will enhances those colors and keep that incandescent-like color. 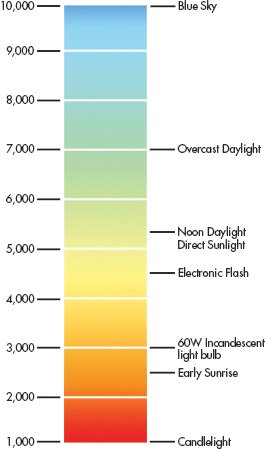